I’ve been going to the Glastonbury Festival for around 15 years now, and I always thoroughly enjoy it. I have to admit that as I get a bit older I do like my luxuries though - this year I had the amazing luxury of my camper van. A huge awning, a proper bed, running water, my own toilet… it’s almost unrecognisable from my years spent shivering in tents or covered in mud for five days straight!

Needless to say, the festival itself was as excellent as ever. This was the first year I didn’t actually go around the whole site - I didn’t once walk in the area from the ‘right’ of the Pyramid stage up to and including the Other Stage, so I didn’t even set eyes on the Dance Village etc. Why? Well, partly because the weather made walks for the sake of walking a bit of a pain, but mostly because there was just so much to do in the ‘Avalon’ side of the Avalon/Babylon world.

One thing I knew that I could not miss was the tribute to Tony Benn at LeftField. Billy Bragg, Michael Eavis and Benn’s son and granddaughter gave very moving speeches. I have to say, I did feel myself welling-up a bit, and there were tears around the packed tent. Tony Benn was always worth seeing at Glastonbury, and it won’t be quite the same without him. 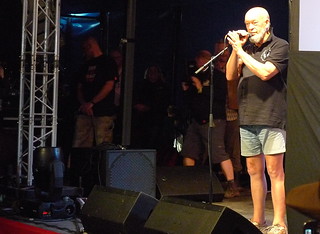 There were many good debates at LeftField this year, and it’s always brilliant to be around so many people who want change and to make Britain fairer and more progressive, and they’re mostly younger than me so the future is bright! Every year there is huge enthusiasm for the Greens and despair at what the government is doing and the rise of deeply unpleasant parties such as UKIP. While there is of course an element of ‘preaching to the converted’ at Glastonbury, it does indeed ‘recharge your activism’, as the LeftField slogan says.

As always, I spent quite a lot of time in the Speaker’s Forum in the Green Futures field. There were some excellent and inspirational talks again, with a good speech by Green Party leader Natalie Bennett as well as Jenny Jones, who gave a good talk on the very worrying and very murky world of undercover policing in lawful protest groups and NGOs. 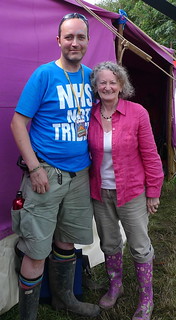 As well as political and environmental talks there were also some purely interesting ones, mostly at the new ‘Free University of Glastonbury’ up at the Crow’s Nest. I’ve always had a soft spot for Professor Alice Roberts, but that wasn’t necessary to think that her talk on evolution was really excellent. She’s a brilliant science communicator and also just a generally friendly and excellent person. Who wouldn’t warm to someone who gives an excellent science talk then later that night bops around along with you to punk band Anti-Flag? 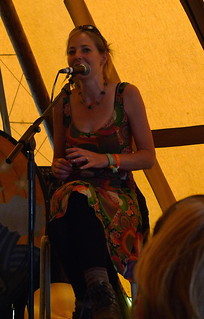 There was also some excellent comedy. Jeremy Hardy was brilliant as ever, and I caught Marcus Brigstoke’s Policy Unit (with Phil Jupitus, Josie Long and Nick Doody), Arthur Smith, Mark Steel and a few others. I miss the days when Stewart Lee was a regular Glastonbury feature, but there you go - times change.

And so the music! Yes, lots of good stuff. The only thing I saw on Pyramid were Elbow, who were excellent. As I said previously, as I get older I lose patience with hanging around miles from the front of the stage having to watch it on the big screens. The atmosphere is good, but if you’re on your own there’s little point - better to catch the main stage acts on telly afterwards. There are literally dozens of stages on the site where you can be right up in the action, so that’s where I stayed this year. It was also conveniently away from the mud and rain.

Just a quick mention of the rain - it was in no way as bad as it has been in ‘wet’ years, but I have honestly never seen rain as huge as that which fell on Friday during and after the impressive thunder storm. It was that big, fat, warm rain that you get in rainforests. I’ve never seen the like in the UK. Crazy.

So anyway, musical highlights included (in no particular order) old staples I’ve seen before such as Billy Bragg, Elbow, The Bad Shepherds, Paul Heaton and Jacqui Abbott, Flipron and Suzanne Vega, as well as some bands and artists which were new to me, including AlbaRoma (excellent gypsy punk), the WooHoo Revue (an Australian band that I can’t really describe but were excellently manic) and Kate Tempest - a genre that really isn’t my sort of thing but was really, really excellent. I’m sure there were others - I saw dozens - but those are the ones that most stick out in my mind. 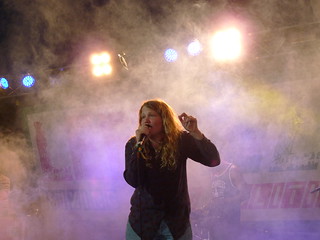 And so another year of Glastonbury is over. I don’t know if I’ll be able to go next year, so I tried to really make the most of it. If you haven’t been you owe it to yourself to try it at least once - it’s like nothing else on Earth.

You can see the rest of my photos here