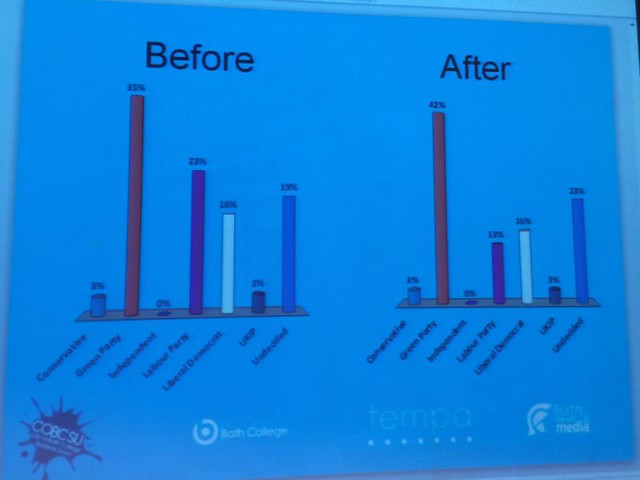 The first was a hustings with all six candidates at Bath City College. This was a general hustings rather than being about a single topic and had a good sized audience of staff and students.

There were some good questions and the students were clearly engaged in the issues. Jon Monie (from ITV, and pantomime) span a wheel of fortune-style device to select questions, and there were also questions that we all had a chance to answer.

A poll was taken before we had answered any questions, and again once we had finished. The results were encouraging, as can be seen in the photo above. At the start the Greens were polling ahead of the other parties at 35%. At the end of the event we had moved even further ahead, to 42%!

While I was confident I’d do reasonably well, with the parties popularity with the 16-24 age group, I was pleased to move even more ahead after the hustings. This seems to have at a cost to Labour whose candidate saw their support drop by ten percent. His supporters seemed to move either to me or to ‘undecided’. In any event, at 26% ahead of the second-placed Lib Dems, I’m pleased with the result.

Top marks to Bath College who laid-on a good spread of food too!

The event was live-streamed, and I imagine you’ll be able to watch the recording too. I’ll post the link when it is publicised.