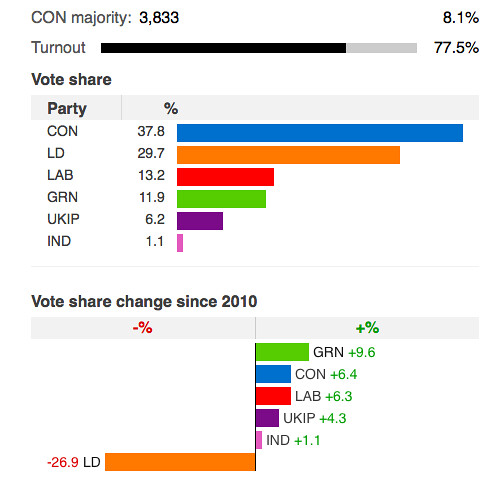 So, after more than a year of campaigning, more than 25 hustings, TV, radio and a lot of meetings, the election happened. You’ll have heard the overall result, and above you can see the details for Bath. Thank you to all who voted for me!

I didn’t win, which is a shame. I also missed third by just a few hundred votes, which is also a shame, but I’m pretty sure that’s entirely down to tactical voting - I had a lot of people saying they supported me but were too scared not to vote Lib Dem.

The good news is that the Green vote had the highest increase of all the parties. In a way I take that as a ‘win’ - not as good as an actual win, but on a personal level I feel I did pretty well. Of course it wasn’t just me though - I had the backing of a large team of dedicated local members who spent many hours leafleting, door knocking, organising events… you name it. I would like to thank them all.

We now have a government that I doubt any of you are happy with. I am certainly not. You will hear that this is because people loved the Tory message, but of course that’s not true - their vote nationally increased by less than one percent (less than Labour’s did). There is no appetite for Tory policies.

In Bath the Tory vote share rose by more - 6.4% - but the Green vote share increase was much higher, and the combined ‘left wing’ share rise was 16%, more than that of the right wing parties. From this we can see that what actually happened in Bath was that the people punished the Lib Dems for colluding with a Tory government and most of those people voted for offerings to the left of what the Lib Dems were offering.

While we have to live for up to five years of a Tory government, we can take some comfort from the fact that things here are on a progressive trajectory. People are also a bit restless that we have a Tory majority government on about 25% of the national vote. They are ruling for 1 in 4 of us, and with such a slim majority they won’t be popular. Perhaps they won’t last the full term? Let’s hope that’s the case.

I also want to address the ‘tactical vote’ thing I warned about before polling day. We know for a fact that it happened. It didn’t help. The Lib Dems lost by thousands, and even if they had held Bath we’d still have a Tory government. Think how inspiring it would have been to have a few thousand more Green votes! We’ve got the momentum for great things here in Bath in the next election - the surge is there even more than the result implies.

Our NE Somerset candidate Katy Boyce saw a vote share increase of 4.2% giving her 5.5% overall. This is a great result in such a Tory stronghold, so congratulations to her!

Getting a group on the council and 12% at the general election is not only a success in itself but a great foundation for future success. The next local election is four years away and we’ve got a great start on getting more councillors elected, and a great momentum in the Green vote.

It’s debatable whether Labour were really a left-wing party as it is, but it looks like they may well lurch to the right, in their panic. That would be a mistake for them and the people of the UK. However, it would be an opportunity for us. We have a few years now to make our anti-austerity message of social justice clear. The pundits are wrong - the people want it. We will provide it.